As a follow up to Hannah’s excellent post on Henry’s need for a son, I decided to do a couple of posts on the intricacies of Henry’s divorce, also known as the Great Matter.  But a little background first, on Henry’s perception of his relationship with Catherine, with respect to the need for a son. Even though the King remained a perfect gentleman and did his duty by the Queen (namely, sleep with her and escort her on royal occasions), the bond between them was broken long before Anne Boleyn entered the picture.

END_OF_DOCUMENT_TOKEN_TO_BE_REPLACED

If there is one thing plain about Henry VIII; it was his yearning for a son. Catherine of Aragon prayed endlessly for one; Anne Boleyn dangled the prospect of one like a carrot on a stick for well over eight years. However, it wasn’t until Jane Seymour came along, in 1537, that a Queen was finally able to give him a legitimate one (Prince Edward). The Prince’s birth was all the more of a relief for Henry given that it came just months after the death of his illegitimate son, Henry Fitzroy, Duke of Richmond. 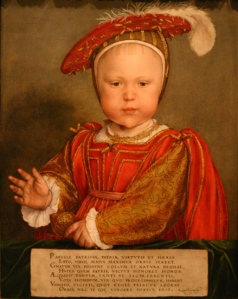 END_OF_DOCUMENT_TOKEN_TO_BE_REPLACED

Henry wanted to marry Anne Boleyn, and hence started the Reformation. He dumped poor Catherine, got married and made his own church with the help of Anne, and had Elizabeth who went on to become the greatest queen evah! And then he executed poor Anne and broke all the monasteries. This is the Reformation. Alright, I am simplifying it, but after hearing so many versions of the above, I am often left pulling out my hair. There are just so many things wrong with this.

Without the divorce there would therefore have been no Reformation, which is not at all the same thing as to say that there was nothing to the Reformation but the divorce.

END_OF_DOCUMENT_TOKEN_TO_BE_REPLACED

It just occurred to me …

The King will receive you on …